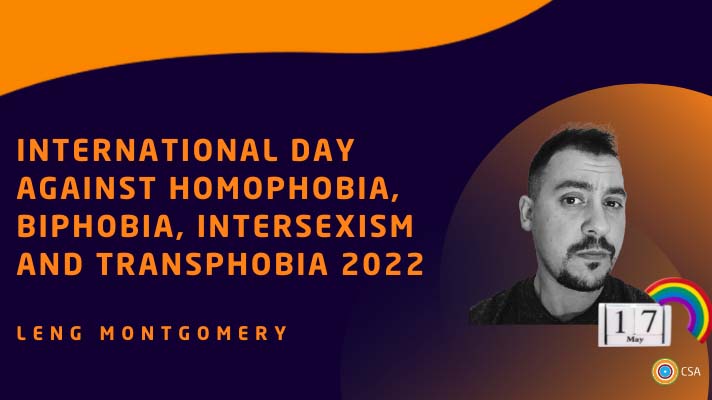 International Day against Homophobia, Biphobia, Intersexism and Transphobia is globally recognised and held annually on May 17th. This has been in place to commemorate the date in 1990 when the World Health Organisation (WHO) declassified homosexuality as a mental illness.

This critical action has been influential in removing some of the stigma that LGBTQIA+ people face based on who they are or who they love.

Sadly, it being pathologised like this previously has contributed towards shame, stigma and discrimination. Not everyone in life will be heterosexual, nor will they always identify with or be the gender they were assigned at birth. For some they sit in their own place and this can be somewhere in between.

In life we will love who we love and for many this should be and is a wonderful thing – to find a relationship, connect with another person and build a life; being authentic, honest and able to enjoy just simple things like holding someone’s hand without being scared you are going to be attacked. Not being told that you’re not normal or that you must have a medical problem.

Being yourself isn’t something that should be threatened with violence or treated as problem that needs to be fixed. We are all different and that’s something that intrinsically we need to accept – celebration of differences means we are being more inclusive and also actively embracing environments that are truly representative of the global society we live in. It’s a shame that in 2022 we are still having these conversations and people are still being abused and discriminated against based on their sexual orientation and/ or gender identity.

People’s motivation to come out isn’t to offend people or to create disruption – it’s about living their truth and upholding a right to live their lives.

The theme for 2022 is ‘Our Bodies, Our Lives, Our Rights’ which brings to light the challenges people are facing particularly against conversion therapies that are still in place, forced sterilisation of trans and intersex people and there are still a number of rights or protection for people who are LGBTIQIA+. In addition to this it has been noted and acknowledged that LGBTQIA+ people who are forcibly displaced face additional challenges rooted in discrimination when trying to access a safe space.

Globally, it’s a very mixed landscape in terms of laws and rights that are actively in place. There is still work to be done which is why allyship matters. The acknowledgement and adoption of IDAHOBIT is a very welcome part of an inclusion calendar – being LGBTQIA+ isn’t just about having pride, rainbow flags and celebration – it’s rooted in protest and lobbying for equal rights. LGBT+ employees are not always comfortable to be out at work and fear career restrictive repercussions and discrimination.

93% of fortune 500 companies have included sexual orientation in anti-discrimination policies and 91% have included gender identity. Yet 1.6% of LGBTQ+ women hold managerial positions in workplace representation and 2.8% is held by LGBTQ+ men in the US.

There is still a pressure for many at work to know if it’s safe to come out or if it will have career repercussions.

Yet many organisations will state they have a culture or want a culture where people bring their ‘whole selves to work’ or promote inclusivity but this representation isn’t always there especially in management and leadership positions.

Allyship is critical and also promotes safer spaces for everyone. Inclusion isn’t about taking from people but it’s about sharing space with everyone. It’s not always easy or comfortable at first but by listening, learning and standing with people that’s how we’ll build more belonging and inclusion, together.

If you’d like to learn more about how your organisation can create powerful, diverse and inclusive workplaces, we’d be delighted to discuss how we can support you.